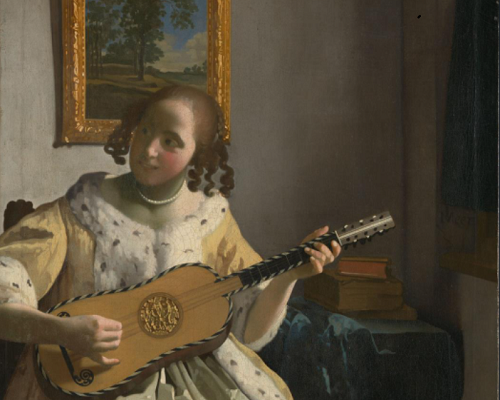 For Dutch Golden Age artist Johannes Vermeer, mainstream success and recognition didn’t come until long after his death. It wasn’t until more than two hundred years after his life that his work was rediscovered and brought to the attention of mass audiences.

At present, Vermeer is regarded as one of the greatest painters, in the same category as masters such as Rembrandt, Caravaggio, and Leonardo Da Vinci. His masterpieces are sold for millions of dollars and are instantly recognizable to most people.

Much of the Dutch painter’s mediocrity and lack of notoriety during his lifetime can be attributed to several factors. For one thing, Vermeer never left his hometown, and to this day, very little is known about the enigmatic artist. Nonetheless, his artistic achievements say much more than mere words ever could.

The Girl with a Pearl Earring Painting

A Girl with a Pearl Earring is the quintessential definition of an old master painting. It carries all the weight, skill, and things critics look for when trying to categorize the works of the great painters. An old master painting generally refers to any great work during the Renaissance, right until the 1800s.

However, the Girl with a Pearl Earring is considered by most to be his finest and most famous piece of art. Unlike many portraits, though, this painting is an imaginary figure and was not supposed to be seen as a portrait. Instead, it is called a ‘tronie,’ which refers to a painting that focuses more on facial expression characteristics above all else.

The Master of Light

One of the significant features that stands out in all of Johannes Vermeer’s work is the exquisite level of light used throughout and the masterful understanding of the concept of light. For this reason, Vermeer’s paintings have been compared to the great Leonardo Da Vinci in this regard.

Vermeer used this understanding of lighting to significantly enhance both the subject matter and the overall tone and feeling that was to be displayed within a particular painting. Furthermore, Vermeer focused on achieving this feeling in just as much detail as the actual painting.

Vermeer also used a technique known as Chiaroscuro, another popular method used by artists such as Da Vinci and Caravaggio. Chiaroscuro employs strong contrast between light and dark to create a sense of volume and added boldness of color. Again, Vermeer was one of the greatest artists in achieving this effect.

Quality and Quantity of Detail

One specific trait that stands out from the rest when admiring a Vermeer painting is the level of highly detailed quality therein. Vermeer’s paintings are about as close as you can get to a photograph without taking an actual picture. It cannot be overstated just how impressive this is.

Vermeer was a methodical painter and only produced a painting every two or three years. Consequently, it is safe to mention that Vermeer was a perfectionist and adopter of the saying quality over quantity.

With that being said, the sheer quantity of detail on display within his paintings is just as massive as any other part of the work and significantly contributed to the overall result of high quality. Vermeer painstakingly worked on the minor details to achieve such beauty within the brushstrokes.

Perhaps the most unnoticed or unappreciated part of Vermeer’s repertoire is that it is believed that he was self-thought. Sure, when speaking about the artist, many people have heard this fact before, but the sheer significance of what it truly means is often lost.

No record or documentation ever found stated that Vermeer attended any school or trained under any master. This fact, accompanied by the natural change in his style over the years, indicated that he followed his way and figured it out by himself.

Moreover, it is believed Vermeer also mastered highly complex mechanical techniques to aid his paintings. Scientists thought that Vermeer must have used camera apparatuses and darkroom techniques to enhance the overall aesthetics of his images and make the overall process a lot easier.

A Man of Mystery

The most underappreciated aspect of Vermeer’s achievements is simply the fact that he managed to remain so mysterious. Very little is indeed known about the profound artist. This dramatically adds to the mystique of his legacy and the value of his paintings.

Furthermore, Vermeer was utterly content with his life, remained in his hometown, and sought no fame. This inner peace and contentment within oneself must be admired and is a rarity, especially among artists.

We can all learn a lesson or two from Vermeer when it comes to this. For this reason, his example of how to live one’s life contently might be his most undervalued achievement. Vermeer pursued art not for money but simply for his love of it and the personal growth it provided him, and in the end, this is enough.

Johannes Vermeer’s achievements rank among the greatest artists of all time. His paintings are lorded as some of the finest ever created. If you wish to know about Vermeer artist, and Vermeer the man, check out Johannes Vermeer artworks.

An Overview Of Consumer Protection Law And How It Works