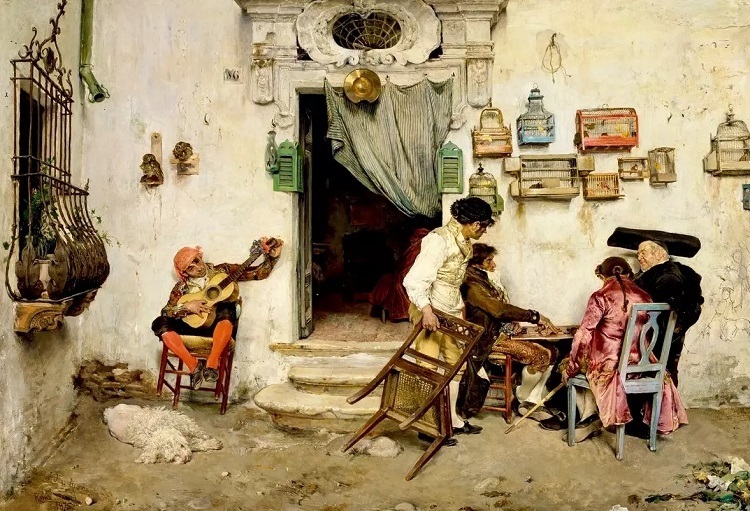 These series of paintings came at a later stage of Claude Monet’s more established career as an Impressionist artist. Claude Monet traveled extensively through France in search of landscapes that inspired him to put his white canvas in front of it and to start painting. Sometimes the weekend trips would turn into several month-long trips.  In 1883 while on a train ride from his hometown La Havre in Normandy to Paris, he saw a magnificent landscape view out of his window and was completely mesmerized by it. He came to draw in the area as he rented local property and in 1890 purchased the house with the garden. Monet hired a local contractor to turn the pond into a lake by diverting the nearby river, building the iconic bridge and planting the water lilies. What he created in the end, were snippets of landscapes that he captured from places that he visited before. He was impressed by the Japanese architecture and he borrowed the concept of the bridge from his trip to Japan. When he was in London, he was mesmerized by how English artists were incorporating how natural light was interacting with objects. Starting from 1890 till 1926 he worked tirelessly around this pond, tirelessly trying to capture the perception of light that was presented to his eyes in its natural form without embellishments. The same object of water lilies on the pond he could paint throughout the entire year. He preferred to work with the primary colors by mixing it together to reach new tones. The author uses a variety of shades of yellow, blue and green colors to create contrast and depth. The white and pink colors on the water represent the water lilies that float on the lake as the calm water surface reflects the sky and the dark colors represent the woodland scene of thick and dark forest on the background.

The morning in the forest is one of the more famous paintings by Ivan Shishkin. This forest art masterpiece is filled with admiration of how harmoniously the animals and nature coexist together. The depiction is so realistic that it’s hard to fathom that it was painted with brush strokes. The colors are so vivid and accurately reflect the mood of the early morning in the newly waking forest. In this calm, there is a drama unfolding, as the observer remains to guess what preceded the uprooted tree and why the group of bears is scrambling.  There was a strong storm the night before, as the huge pine tree was twisted and uprooted, snapping the tree trunk. The shades of yellow, green and blue emulate the perception of depth as the sun pierces through the thick brushes of the pine trees. As the sun beams gently embrace the top branches, the distant grey clouds, the small window of a blue sky, and the thicket of the forest shown with dark green. The blue haze on the horizon creates the feeling of how enormous the forest is. Paintings of forests in Russian culture play a strong role as the forests provided firewood, game, berries for daily sustenance.

Originally an immigrant from Germany, Albert Bierstadt (1830 – 1902) has left his legacy as a German- American landscape artist. He was intrigued by the American West and depicted the grandeur of the American West. He joined Colonel Frederick Lander in 1859 to chart the Oregon trail via Wyoming to find new safe routes through Indian territories. Being an immigrant he was part of the Westward expansion and saw firsthand how the arrival of new European settlers was changing the landscape originally inhabited by wildlife and Native Americans, who were forced out of their lands. It is ironic how being an immigrant taking over the lands, he was sympathetic to the plight of the Indians and wildlife. Bierstadt in his paintings of forests layered different objects to set the tone of peace, drama or grandeur. In some of his paintings the trees like miniature against the backdrop of a towering mountain and in other trees like gigantic by placing tiny humans next to it.

In Giant Redwood Trees of California (1874), Bierstadt depicts this grand image of enormous trees that dwarf the nearby river. On the banks of the river, a couple of Native Americans sit blissfully looking into the distant waterfall. The warm colors of orange glow permeate the air giving the picture a romantic vibe filled with nostalgia. This woodland scene is different from Ivan Shishkin’s “Morning in the Pine tree forest” in the exaggerated grandeur of the elements that do not portray reality accurately. Rather he carefully layers different elements to dramatize the scene. He achieved the muted tones by applying layer over layer of paint to achieve the proper mood. It is known that Bierstadt employed the luminist style which creates a peaceful setting that the observer can immerse himself into. Also, the sun’s warm glow shows that it is evening time, and the few Native Americans in the picture portray the end of their era on these peaceful lands.

Vincent Van Gogh dedicated his time between 1887-1890 to the woodland scene genre  also known as “sous-bois” in French which was popular with Impressionists and followers of Barbizon School. They differed in their approach of painting landscape with vertical strokes getting up close to the trees and going against the traditional concept of using horizontal lines to depict the vast landscape from afar. The author masterfully combines shades of color and light to give to the paintings of woods an added dimension. The presence of the sky seems trivial, as Van Gogh emphasizes the interaction of light through the trees as it falls on the grass below the trees in shades of white, yellow and red. This type of composition was rare before the 19th century and captures not only the landscape but their emotions. Vincent Van Gogh committed suicide in 1890 at the age of 37 following his fight with depression and some of the paintings of woods are believed to be painted outside of asylum that he entered voluntarily at Saint-Rémy-de-Provence.

A member of the realist era, Isaac Levita’s work arouses nostalgic themes as he depicts carefully layered trees, open fields, and rivers to create a muted happy feeling into his paintings of woods. He was briefly influenced by a teacher who taught in the Barbizon style, took Levitan to open landscapes and taught him to paint with his emotions. He would spend his time in the surrounding areas of Moscow, where birch trees grew freely and which had become the central motif in his work. His paintings of woods like the Impressionists in Europe capture the mood around the birch trees across different seasons of the year. In the Golden Autumn (1895) painting author shows autumn groves with birches covered in orange and yellow colors as the sky dotted with gray clouds are mirrored in the still river winding through the lower right part of the painting. His forest art eventually began to incorporate architectural elements such as huts, monasteries and other buildings.

Why cardboard boxes Melbourne are famous in Australia?